Tetsuro Segawa(瀬川 哲郎 Segawa Tetsurō) is a large-framed, chubby third-year student, and the older brother of Mizuki Segawa. He's also Shō's closest friend. He is highly intelligent and can think rapidly when he has to. He is a rabid science fiction fan and the leader of the sci-fi club in the school, which gives him the background knowledge to make numerous accurate guesses about the Guyver armor, Zoanoids, and Kronos. He wears his hair short and has glasses.

Tetsuro was, according to the 2005 Anime series, the first person to come into contact with the Guyver after it had been blown out to the lakeshore by a grenade. Being a geek, he was fascinated by the Unit, though he was completely unaware of the large role it would play in his and Sho's lives. His first guesses about the nature of the Unit - a mecha and a tiny UFO- reflected his own interests, but would ultimately prove to be untrue.

His first guess, however, was much closer to the mark than he knew at the time.

When the Unit was triggered - by Sho tripping and falling into it in the 12 part OVA, Sho deciding to examine it closer and accedentally tripping the Control Medal in the manga, and by Sho trying to wrestle it out of Tetsuro's hands in the TV series - Tetsuro's initial worry was that it might be a land-mine, and he was scared for both his and Sho's lives.

Like many of the characters in the live action film, Tetsuro has also had some major changes. One of the most major changes is his name. His name was shortened to just Tetsu Segawa. Also, he isn't Mizuki's big brother. He instead is her father, and appears to be a lot more older because of this. Not much backstory is behind this character either. The only things known is that he was one of the scientists of Chronos and a failed Test Type (somewhat resembling a Nealcos) who ran off with a Guyver Unit planning to give it to the CIA agent Max Reed. He later changes his mind about giving it to Max and instead hides it inside a plastic box sitting among a pile of junk. Later, Lisker and his elite team of Zoanoids catch up to him. Which results in his death after him and Lisker duke it out as Zoanoids. The scene of his death is then investigated by the police. Sean Barker stumbles upon the crime scene finding the Guyver Unit in the plastic box.

All in all, Tetsu Segawa in film was based on two characters: One is Tetsuro, Sho's best friend; and the other is a rebeled Zoanoid whom responsible for Sho's fateful bond with Guyver Unit 1 in original series in which Tetsu is more based on the latter.

This article is a stub. You can help Guyver Wiki by expanding this page. 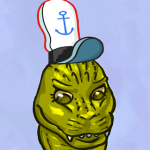